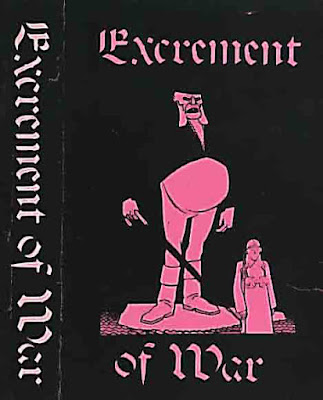 Excrement Of War, E.O.W. , were an English Punk band that ran their course from, roughly, 1990 until 1995. They went through a few line up changes and put out a split 7" (w/ Dischange) & a 7" with the first line up and put out 2 split 7"s (with Beyond Description & Deformed Conscience) and a full length 12" with their last known line up. I very much prefer the first line up (the 2nd was also good, i just prefer the first 2 7"s).
Anyway, to the task at hand, namely, this demo tape. Its their second demo tape (i also have the first, i just wanted to post this one first for some reason). Im not sure the year of this, but it has the 2nd line  up, so I'm going to guess the year as 1992 or 1993. Most of the songs were rerecorded for the Cathode Ray Coma LP. The production value is, again, right where we (me, you, and the rest of the maniacs who visit my blog) like it. RAW! It starts with one of my fave EOW songs, their namesake, Excrement Of War.
The family tree, the punk lineage, of this band is long, legendary and extensive. Members played (or play in) bands ranging from DOOM, Sore Throat, ENT, The Wankys, DIRT, the list goes on and on. Legend and Legion!
Posted by NO BEAST SO FIERCE at 3:41 PM 10 comments: 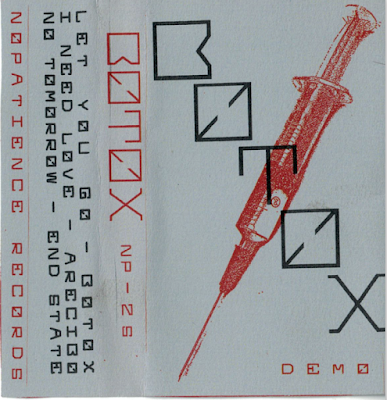 Australian Post-Punk/Synth Punkers BOTOX with their 2014 6song demo tape.  I love this tape. I feel if some of the songs got a little more attention and a little more love (and better production {tell no one i said that!!}) , i think they could be radio hits, they could even be long lost demo songs from bands like (a Punker) Pet Shop Boys or (a Hardcore version of) Erasure. But don't let that throw you off, this is a great, gritty demo of good songs. Unfortunately, they haven't done anything since.
Posted by NO BEAST SO FIERCE at 3:31 PM 4 comments: 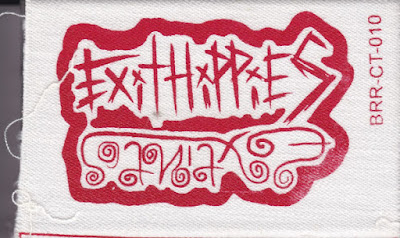 2006 split cassette with one song from Exithippies and one song from Extintos on the great Bastard Rock records. This is the second installment of the Underground derby series, the first also feared Exithippies & Le Fait Tuer (a band I believe part of the Japanese micro scene, something Bastard Rock records excelled in. Maybe Tom M. from Lexington can help here, Tom?). Anyway, back to the task at hand.
If you follow this blog, you should know Exithippies, a favorite around here. They have done this song before, as Exithippies are won't to do. The production value isn't great, but right where we like it, no?
Extintos are also a Japanese HC band who worship at the alter of 1980's Chilean Hardcore, especially Bastardos Sin Nombre, Crimen Impune, Herpes & more (notably bands from the two great 80's Colombia comps "Estamos En La Sima" & "La Ciudad Podrida Vol 1").
Again, each band does One song. More for the purists n collectors, but good all the same.

Also, the tape came in this canvas slip, so instead of scanning it, i just took pics off Discogs. 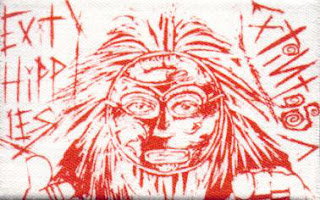