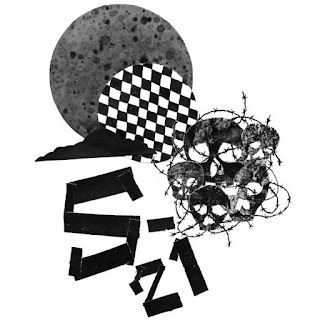 Been a long time so I'm naturally rusty at this. But here we go....

S 21 from Philly and their 2016 4 song demo tape. I wanted to post S 21 for my first post in ages for several reasons. One it wasn't on any of MRR's staff 'Best of.." lists for 2016 and thats a crying fucking shame. The other reason is this shit needs to be heard, fuckin relevant & poignant shit! Almost an all-female band, the singer just belts out these songs with a furious ire! She is Cambodian and you can hear the angst n anger n betrayal in her songs. Being Cambodian, I'm sure Khmer Rouge's terror had a direct affect on her, as the country aint that big. And you can hear it. She spits venom man! She has that same way about her that i hear in Sothira's Crucifix, just pained and pissed off. Again, poignant. Passionate. Frenzied. Pissed off like Cal's (early) Discharge & Daryl Kahan's Citizens Arrest, and shit, even DeNunzio's INFEST. The music is as serrated as the vocals, chunky and galloping at parts, but not in a Stenchcore kinda way, but in the best possibly Hardcore Punk kinda way, its dirty, its abrasive, and  is a goddamn tornado!

The first song has a clip from, I believe, Ros Serey Sothea, a 60's Cambodian pop singer who was murdered,  along with a lot of other musician "subverts" by Pol Pots Khmer Rouge. That's how this demo starts....

To me, S 21 is the most relevant band playing right now in this Dark New Age.

Words from Cella (vocals): "42 years ago, the Khmer Rouge commenced one of the most brutal genocides in history, deeming it as Year Zero, a total eradication of its own past, people, traditions, and advancement. Their four years in power claimed two million victims, including multiple members of my own family. With President-elect Trump's impending presidency and it's fear-driven politics, with threats of mass deportation, mass incarceration and innumerable attacks on black and brown bodies everyday, and taking in some of our own experiences as women of color, my bandmates and I can't help but think that another Year Zero-like era is looming. The past few months have been extremely trying for a lot of us and it's hard to fathom what the next four years will bring. It is clear we still have a lot of work to do, but with this band, I feel more empowered than ever. Thank you to everyone who has ever supported us and for giving me the courage and strength to find my voice."