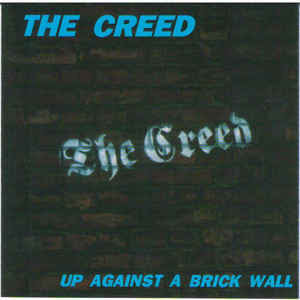 THE CREED 'Up Against A Brick Wall' CD

This album was actually one of my first posts on this blog way back in 2009! Since I deleted about 1500 posts/albums on here cuz of Mediafire nixing my account, i figure I can repost some of them now.

The Creed were a Japanese Oi band that existed in the mid to late 90's, put out this record, two 7's & a split 7". Unfortunately, thats all I know about this band. Their CD goes for a pretty penny, dunno about their 7's though, prolly them too.

Anyway, what we have here is 12 songs of nearly perfect Oi/StreetPunk. It's one of my fave CDs that I own, I just love this juicy lil nugget. The singer has the monotone voice that he uses in every song, and normally I'd hate that lack of range, but it just works so damn perfect to the songs (the gang choruses make up for the lack of range). File this next to Blitz, Gruesome, Snix, Rixe, Criminal Damage, Cockney Rejects, ya know, the best of the bunch. The last song is an amazing cover of a Humpty Dumpty song (a Japanese Oi band that preceded The Creed).