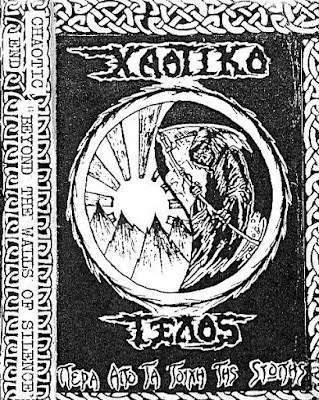 Absolutely essential Greek Crust from 1991. Inspirational, hypnotic, atmospheric, and pounding Crust Punk (how many times can you describe an album with all 4 of those adjectives?). Xaotiko Telos (Chaotic End) , & Forgotten Prophecy, for me, were the pinnacle of Greek Crust.  Chaotic End released a demo prior to this, an album in 1993 AND it looks like they just released their first LP in 24 years! Very excited to hear it! Classic & mandatory listening!

Post Script- After posting this, I went to youtube and heard the title track from their new LP. Holy Fuck!! It is AMAZING!!!! You'd be wise to do the same!
Posted by NO BEAST SO FIERCE at 7:39 PM