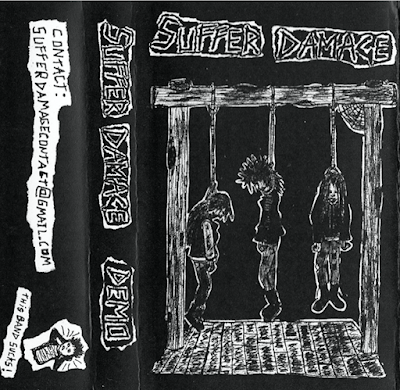 Suffer Damage. Belgian's In It For Lifer's. Some of this lot have been playing in amazing Punk bands as far as back as 1988, shit maybe earlier. Anyway, this is Suffer Damage's 2013 demo. Nine songs of brain drill Noise Punk that pays homage to the originators, notably Disorder, Chaotic Discord, & the Kyushu Island maniacs of the 80's. They did an LP after this thats as good. Also, the production on this demo is pretty fucking tiptop.
Members have played in Private Jesus Detector, Hiatus (I think), Katastrophobia (with the fella from KTAOABC, so there is the punk lineage I mentioned), the little known (in the US) Chronic Disease, & more.
One of my favorite demos from 2013! Give it a go, you WILL NOT be disappointed, I promise!
Posted by NO BEAST SO FIERCE at 3:55 PM